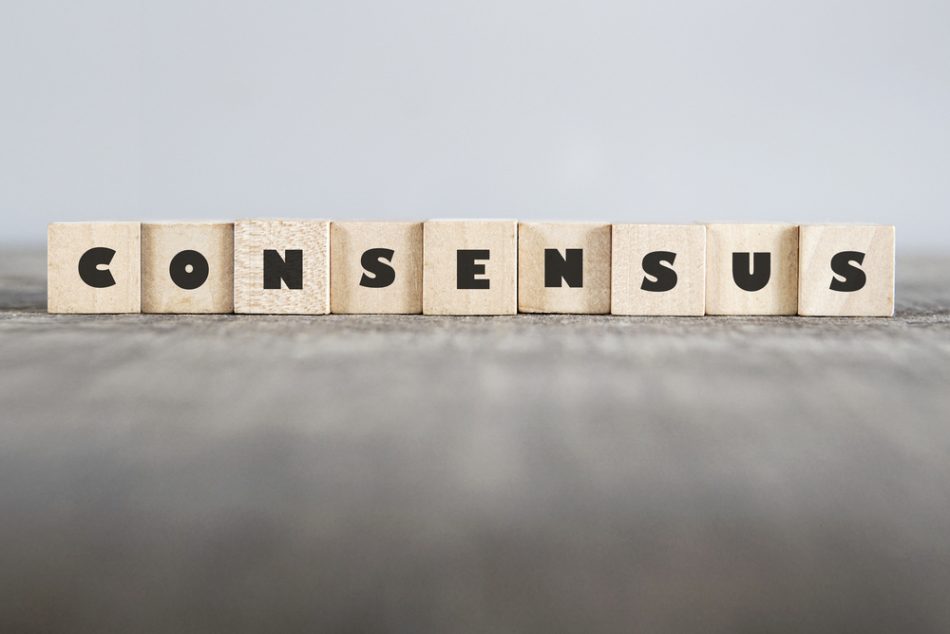 A key leadership skill is the ability to achieve consensus on decisions. Nearly everyone wants to make good decisions and achieve consensus among team members, but most seem stymied trying to achieve both objectives simultaneously. I advocate a 4-step process that I evolved from Dr. Willard “Bill” Anderson, one of my mentors at NASA Langley Research Center.

Making decisions by consensus has many benefits. First, including the widest variety of inputs should create the most information content and minimize the probability that the best decision is outside the ones being considered.

Second, if all team members understand the decision requirements, decision process, and the ultimate decision, any required execution should be enhanced.

Prior to exploring the decision process for achieving consensus, we should first understand what achieving consensus means. Many people have preconceived notions, so let’s look at a few pertinent definitions from the American Heritage Dictionary:

This Consensus Decision Process (CDP) is a formal sequential set of steps. It is important that everyone participating in the process be made aware of the steps prior to initiating the process and should, in fact, know where the team is in the process at any particular time. The importance of this will be made clear in the CDP Step Clarity section below.

Let’s amplify each step in this process.

Examples of how the decision will be made could be any of the following:

Note that the leader will need to exercise care in choosing the process and educating team members on the decision process. Many teams tend to default either into trying to achieve unanimity or voting with simple majority rules. Although there might be times when either is desirable, frequently this is not ideal. My presumption is that most times the leader will choose to make the decision herself. However, there are many benefits of delegating the decision to others in the group, such as training, leadership development, and recognition.

Polls or votes should be used cautiously as that would fulfill individual prior conceptions of a consensus process and set precedents for future decisions. Additionally, what is needed is a variety of viewpoints, and it is unlikely that all perspectives will be represented proportionately within a group. Likewise, it is probable that experience, judgment, technical background, seniority, and vested interests will vary widely among team members. Relying on votes may be a measure of any of these characteristics rather than yielding the best decision for the circumstance.

This step involves the stimulation of discussion and collection of inputs from the group. The goals are: (1) create as much useful input of data (raw and unprocessed) and information (data that has been processed, categorized, and assessed) as possible to assist in the decision-making process; and, (2) involve everyone in the decision process.

This input collection step is the most challenging for the leader and requires talent, interpersonal skills, and extemporaneous group management experience. The quality of CDP requires the leader to be effective in each of these areas.

Many groups of diverse individuals have challenges that need to be managed. For example, some people are loud, fast talkers who dominate the conversation. It is hard for others to get a word in. The leader should allow these people to make their inputs, but if they dominate the conversation too much or become too repetitive, the leader must tactfully find a way to say: “Let’s give someone else a chance to make inputs.”

During the data collection stage, it is important that inputs not be judged prematurely. All ideas in the early stages of brainstorming are good ideas. Some personality types shut down if they or a colleague have their ideas prematurely dismissed. It’s important to emphasize that there are no bad ideas or inputs at this stage.

Engineers are notorious for taking the “devil’s advocate” approach and trying to shut down discussions on new ideas that are immature, especially if they appear to conflict with their preconceived solution. If they are aggressive, other people in the group will cease to participate in the brainstorming process.

Some people are fast thinkers and can make quick inputs. Others are slower thinkers and prefer to consider ideas prior to making suggestions. Many of us use both characteristics, and the results can be interesting. A recent book, Thinking, Fast and Slow by David Kahneman, explored the benefit of exploiting both fast thinking and slow thinking and learning to recognize the characteristics of each. The leader must become adept at understanding the types of inputs that are being made and adjust the conversation and process accordingly.

No matter how well you try to draw out people in a group during the input collection stage, some members are going to be shy. Drawing them out in the group can be difficult.

I have observed that some of my best inputs came from slow thinkers or shy talkers on the team. Even though results-oriented managers like to complete the CDP as quickly as possible, for important decision processes, I delay the decision. I announce that the decision will be made in X days or, sometimes, weeks. It provides an opportunity for slow thinkers to noodle on the idea, and time for the shy talkers to back-channel information to the leader.

When the group reconvenes, the leader can draw out the slow thinkers and represent the viewpoints of the shy talkers, giving credit as appropriate. This allows the entire group to reap the benefit of these sources of information.

The decision should be processed exactly as described in Step 1. If the leader announced she was going to make the decision, then the leader collects the data and makes the decision. If the decision was supposed to be assigned, it is preferable for the decision to be made as indicated.

I have seen cases where the leader loses confidence in the decision maker(s) and decides to overrule the decision or refuses to allow it to go forward for fear the result will not be what the leader wants. In either case, this path is obviously disastrous for future team dynamics, morale, and learning. It would be much better to retain the decision upfront than to withdraw it midstream.

The most important part of Step 3 is communication clarity. It is essential that the decision is clearly communicated and should include the following:

Truly effective leaders engender support and trust even when making difficult decisions that might be in opposition to individual views within the group. One of the goals of the CDP is to help the leader achieve this objective.

I observed in many organizations the debilitating results of constant debate and the behind-the-scenes undermining of progress that results when not all team members accept the decisions. It makes the leader appear weak, destroys team cohesive, and squanders productivity.

If members of the group continue to debate the decision or not support it, it is important to remind those members that such debate is no longer permissible. In mature teams experienced in CDP, other team members would provide such advice so that the responsibility is not entirely up to the leader.

I always try to make it clear that our organizational values are that we vigorously participate in decisions, but once the decisions are made, we just as vigorously support them. If individuals are unable to accept this premise, then it is a violation of our values, and such members are at risk of being ‘voted off the island.’

Key Roles of the Leader

The leader has several key roles within the CDP:

It may seem a little silly or basic, but it reinforces the participation model, and I notice it helps get people entrained in their roles. When a debate comes up after the decision has been made, others in the group remind that dissenter that we are at Step 4, time for dissent and debate is over.

After implementing the process with a group for the first time, I have had people come up to me afterward and say that was great. They really enjoyed the meeting(s) and deliberation(s). The formal and healthy process of brainstorming and decision making can be invigorating.

It is essential that every person on the team understands on which step the CDP currently resides. Lack of such clarity could contribute to huge problems within the organization. Let’s study the situation and observe the implications of ‘step misalignment’ among team members.

Team behaviors before a decision point (Step 2) include the following:

Expected team behaviors after the decision has been made (Step 4) include the following:

Let’s look at the situation where we have a strong, normally participative individual within the team but who is unaware of which Step the CDP is at due to poor communication.

This situation can be summarized in the following matrix showing what the perception of the team will be if an individual is in a different step in the process than the rest of the team:

Clearly, it is essential that everyone on the team is on the same page and knows which step the team is at in the process. If an individual is misbehaving, one explanation is that the person is unaware of where the process is at currently. The leader should start with this premise during any clarification or reminder.

Just as making and supporting decisions following the CDP is a critical part of organizational success, reconsidering or changing a decision is also essential. Obviously, organizations must adapt and have the ability to adjust decisions based on changing circumstances. This mentality has to be ingrained within the culture. So, how does one reconcile Step 4 of the CDP, always supporting the decision and not allowing endless debate, with the ability to change decisions?

I advocate using the CDP process in an appealing format. It’s fairly similar to the judicial system. One can appeal a decision, if and only if, there is new data. One can’t appeal just because of disagreement with the outcome.

So if a team member proposes to challenge the decision, the first consideration is whether there is any new data. If the answer is no, then the leader and team remind the challenger that in Step 4 of the CDP we support the decision.

If the original decision is to be reconsidered, then convene the group and rerun the CDP process with all the data including the new data. Once a consensus has been arrived on with the CDP, announce and execute the decision. This reconsideration process allows organizations to simultaneously be agile with respect to new information while having a culture that makes and executes against its decisions with maximum team alignment.

The best organizations are ones that efficiently and effectively make decisions and quickly achieve team alignment to execute their decisions. The Consensus Decision Process (CDP) is designed to facilitate these goals.

Properly executing the CDP with experienced and talented leaders maximizes the quality of inputs, provides better quality decisions than default ‘design by committee’ methods, and provides better decision execution. It promotes opportunities for team members to proactively participate in the future thereby contributing to organization morale and health. Also, greater participation usually makes it easier to achieve buy-in and support from diverse teams after decisions are made.

When teaching this process in one of my organizations, I had several lower-level employees come to me and indicate that the process was working well with working-level teams, but the senior administrators in their individual business unit seemed to be unaware and/or were ineffective in running the CDP. I was encouraged to do some remedial instruction with the senior executives. Once this was achieved, that particular business unit was recognized both for being effective and nurturing employee morale. As a result, many employees requested transfers to that business unit.

Here is a quiz on this Consensus Decision Process.