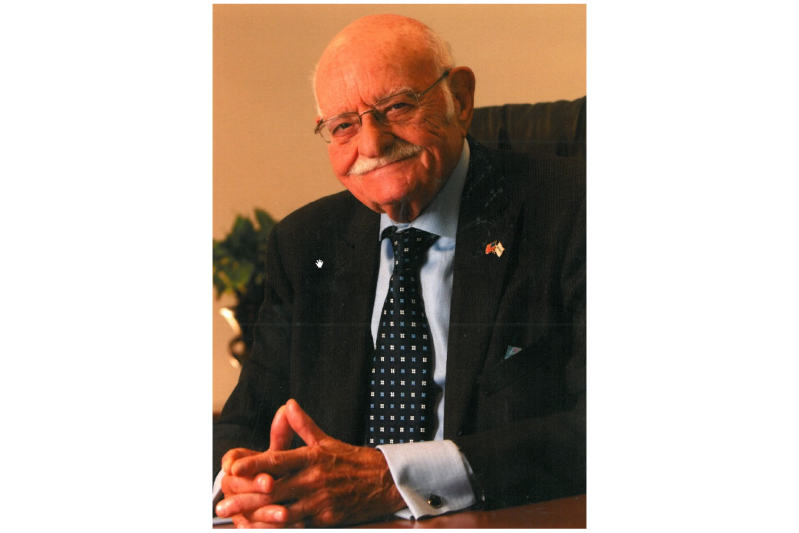 Mortimer R. Feinberg, Ph.D. was a pioneer in industrial psychology and was one of the first people to introduce the concept of involving psychology in management processes. He advised corporate CEOs and heads of states for over five decades. I credit him with being a vital part of the success in my career. I worked with him from 1991 to 2015, starting at Embry-Riddle Aeronautical University and continuing at Colt, Insitu, and Seeq. I had many exciting times working with him.

During my first year as President at Embry-Riddle, we had many challenges, such as enrollment declines, constrained resources, and morale problems. As a change agent, I was in the process of making numerous changes. Universities aren’t used to change, however, and I broke a few eggs.

Lyman Wood, who was a substantial donor for Embry-Riddle, thought I could use some help. Lyman’s father was an executive who worked with Dr. Feinberg as a coach, and after Lyman graduated from Harvard and Harvard Business School, he, too, used Mort’s services until Lyman’s retirement. Lyman thought that I would benefit from executive coaching, and he retained Mort’s services for the first year. The agreement was that if I wanted to continue, I could, but it would be up to the organization to finance the continuation.

A colleague, Paul McDuffee, and I went to visit Dr. Feinberg. Now, Paul is about my age with good stature, but his hair was turning white prematurely. When we arrived, Mort was convinced Paul was the university president, and I was the colleague. It took about 45 minutes for him to figure out the real situation. To this day, Paul and I still laugh about that first meeting.

Dr. Feinberg started out by involving the team in considerable psychological and IQ testing. He used these in combination with his initial interviews as the baseline for each of the people he worked with.

He had an office on Madison Avenue, and almost every time I visited, someone famous was coming in or going out. He had lots of photos of famous people on the wall, and he interviewed four standing U.S. Presidents to discuss their leadership psychology.

Mort also had a great sense of humor, and his speeches, which were always well-received, included jokes at the beginning and end and anywhere in between. He wrote down his jokes and tried them out on people at lunches, dinners, and even in meetings. From this, he learned which ones worked in small, medium, and large settings. It was old-style humor, but we all appreciated his effort.

I remember that Mort used to bring several clients together for dinners about once a year in New York City. During that time, he had us give impromptu talks. We all joked that the reason we put up with this ‘harrasment’ was because he was writing a book Why Smart People Do Dumb Things. We were all apprehensive that we would be mentioned directly or availed incognito in the book. As a result, we were all anxious to keep him happy and on our side such that we wouldn’t become material for his book. Fortunately, we were only mentioned in the Acknowledgements page. As far as we could tell, none of us were directly mentioned. Although, he had a couple of anonymous stories that he might have produced by merging some from us, but it wasn’t completely apparent.

I recall that Mort wrote the CEO of American Airlines and told them him he had recently lost his elite status and was expecting to do a book tour for his new business leader book, Why Smart People Do Dumb Things. He was wondering if he would be willing to extend his status to facilitate his travels. He received his renewed status via overnight messenger. Apparently, we weren’t the only CEOs desiring to stay out of his crosshairs.

In the beginning, Mort and I tried several approaches, but we finally settled into a cadence that worked really well. I document my work with him because I believe this can be useful to others.

As my executive coach, I had him visit me three to four times a year. We aimed for four, but sometimes it didn’t happen. We also had a telephone call once each month. During a visit, we typically went to dinner the night he flew in, which provided him the context for what I was working on, any issues I or the company were facing, and the status of my homework, which I describe in more detail below. The next day, he visited each of my direct reports – the VPs – and maybe a rising star somewhere within the organization. Sometimes, he met with a VP and their direct reports to work on a business unit issue.

He also included other events like a book club where the VPs gathered and reviewed a book and talked about issues. This built the VPs into a better team to support me and their teams. Dr. Feinberg stressed that everyone has strengths and weaknesses, and we have to continuously strive to close that gap. And if the VP team that supports you understands each others’ strengths and weaknesses, then they can fill in for each other. They, as a group, ensure that they represent everything that’s needed or identify gaps that need to be filled with additional talent or capabilities.

After spending a day or so, he came back and debriefed me. During each meeting, he gave me homework. By this, I mean he covered numerous issues that came from the VP discussions, business unit meetings, or ad hoc comments. He addressed those items without attribution, and he identified two to four things for me to work on. For example, maybe the general consensus was one of the business units had a good idea, but I didn’t give it enough credence. Perhaps the team feels I’m overreacting/underreacting to good/bad news or there are personnel issues. It could be a host of different topics. He would choose some of these and give me homework. The next time he returned, he reviewed my work and graded me on my progress. Sometimes, he reassigned the homework, but most of the time, we agreed that it was in a reasonable state, and he assigned new homework.

The benefits of having an executive coach far outweigh the time and financial commitments. These are four of the benefits I experienced.

But to make that work, there has to be some perception of changes, and those changes must happen without retribution. That means that I had to more or less pretend that there was no attribution, even if I figured out who brought it up or was actually informed of the responsible party. I had to take the information, have no negative reaction, and remedy the situation. Once you successfully do this a couple of times, the team learns that the time with the executive coach really is a safe space. And, the executive coach actually helps ‘move the ball’ and gets the CEO to accommodate those concerns and improve the situation. This process creates a less stressful environment with more opportunities to improve the organization.

Mort was instrumental to me throughout my career, and I appreciated working with him. As a way to give back, I developed a website dedicated to him, where I summarized some of the historical contributions he made from his six books and dozens and dozens of his articles. I put them in one central location, which he really appreciated, and I enjoyed doing it. Dr. Feinberg wasn’t web- or internet-savvy, but he loved giving what he called his “link” to people. He had a nice collection of his work to share with his grandchildren and great-grandson. I also dedicate a portion of my website to him because he was so instrumental in my career.

I worked with Dr. Feinberg until he passed away on December 10, 2015. He passed peacefully from natural causes at the age of 93. Those of us who worked with him miss Mort significantly.