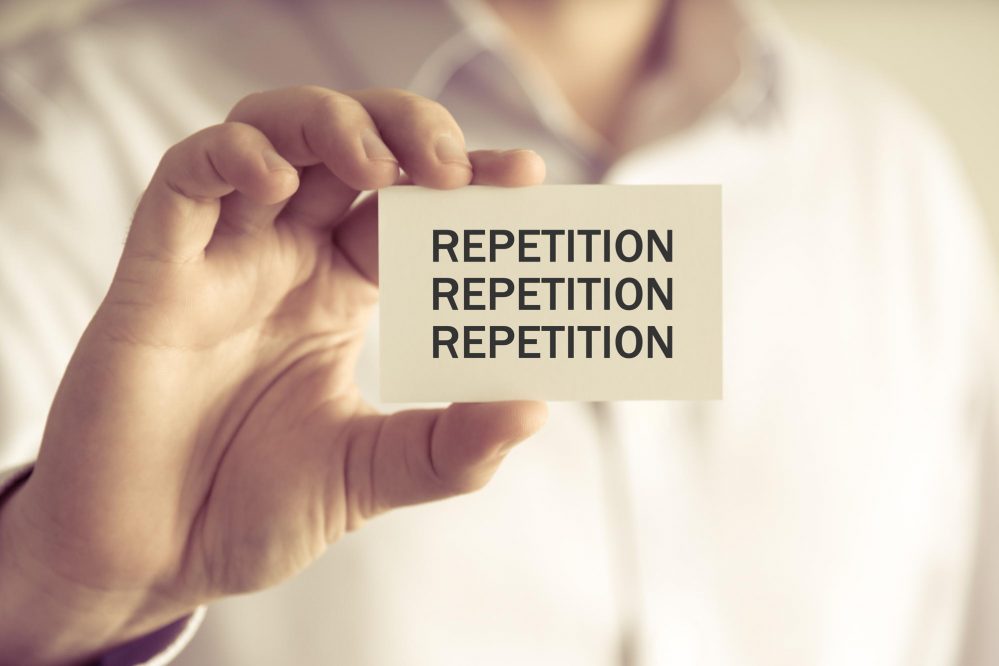 Over the years, I have provided personal advice to many people who encounter repetitive speech patterns that drive them crazy. I can think of three examples of situations when people feel frustrated.

Dealing with people who have memory issues can be particularly frustrating because they are typically loved ones who previously had good recall abilities but now struggle. It can be depressing to watch this happen, but at the same time, it is also annoying to the listener to hear the same information or be asked the same question over and over.

Here’s a typical conversation, illustrated in the image above. The discussion starts with a question or statement and that’s explored (green line). The conversation moves on to another subject, which is discussed (blue). Then, the original speaker repeats the first topic (green). The other person repeats their initial response, which is frustrating, and then moves on to another item (yellow). They discuss this for some time, and then back to the first topic. The cycle continues, exacerbating the listener.

I have a friend and a family member who commonly use this communication style. They start out telling a story with a sentence or two, and then they go back and rephrase the same information, cleaning up the words a bit. They add a little bit more, and then, go back and clean that up. They are, in a sense, editing their speaking patterns as they go along. As the listener, you know what they are trying to say, but they want to find better words. This can become very repetitive and frustrating. You may not notice the pattern the first time, but once you do, it drives you insane.

Every conversation has a starting and ending point. In this speech pattern, each discussion has the same starting point, but the person adds more at the end. You have a dialogue. The next time you speak with them, they repeat the same initial information, nearly word for word, before adding new content at the end. You run into them again, and they repeat the previous two conversations. This goes on and on, each instance lasting longer and longer. It’s exhausting honestly.

I have a friend who does this, and curiously enough, others in his family have this same speech pattern. They are all very bright people with interesting content, but it takes a little time to get used to.

When you notice one of these three speech patterns, I suggest thinking of the repetitive words as a refrain, which is a chorus or repeated words from a song or poem.

People don’t seem to get upset when lines are repeated in songs. In fact, for some, it’s the best part where everyone sings along. They might not know all the words and hum until the refrain comes, then they jump in and sing. Why are these enjoyable and not the three speech patterns?

I claim that they are the same. Think of it as a refrain with your loved one who has memory issues. For rephrasing, think of the repetition as just part of the fun of trying to get the phraseology correct and making sure everyone has a common basis for discussions going forward. For the repeated conversations, it’s a chorus, and we have complete agreement and can now add content.

Heck, I like refrains and choruses in songs and poetry. Why shouldn’t I like it in terms of speech patterns with my loved ones and colleagues? Once I put the conversation into this model, I find that I can enjoy it.