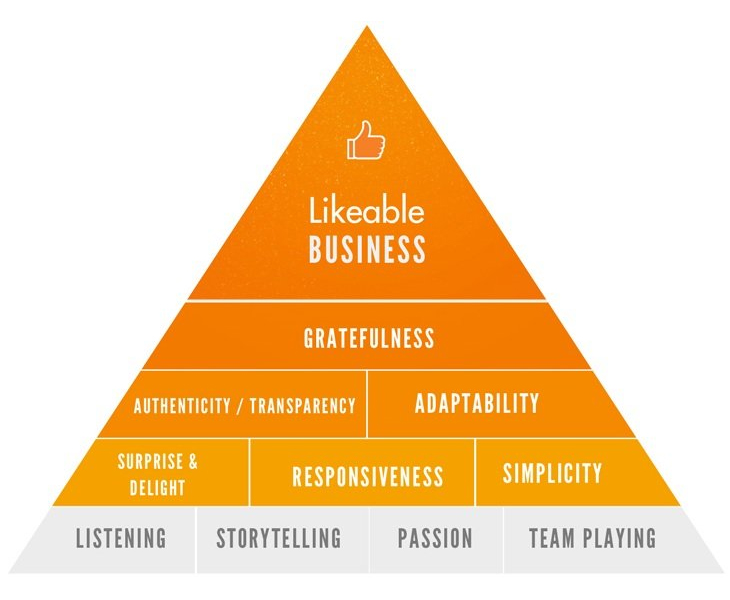 David Kerpen wrote a book called Likeable Business.  During the information collection stage for the book he also collected up some good insights on CEO leadership.  As I reviewed his observations at LinkedIn I decided that I really liked them and wanted to repeat some of those insights here.  His article is titled:  11 Simple Concepts to Become a Better Leader.  I also enjoyed the quotes he associated with each of the pillars.

He used the pyramid graphic above to illustrate his 11 concepts:

“Storytelling is the most powerful way to put ideas into the world today.” -Robert McAfee Brown

“I had no idea that being your authentic self could make me as rich as I’ve become. If I had, I’d have done it a lot earlier.” -Oprah Winfrey

“As a small businessperson, you have no greater leverage than the truth.” -John Whittier

“The only way to do great work is to love the work you do.” -Steve Jobs

“A true leader always keeps an element of surprise up his sleeve, which others cannot grasp but which keeps his public excited and breathless.” -Charles de Gaulle

“I would maintain that thanks are the highest form of thought; and, that gratitude is happiness doubled by wonder.” -Gilbert Chesterton

The Golden Rule: Above all else, treat others as you’d like to be treated.