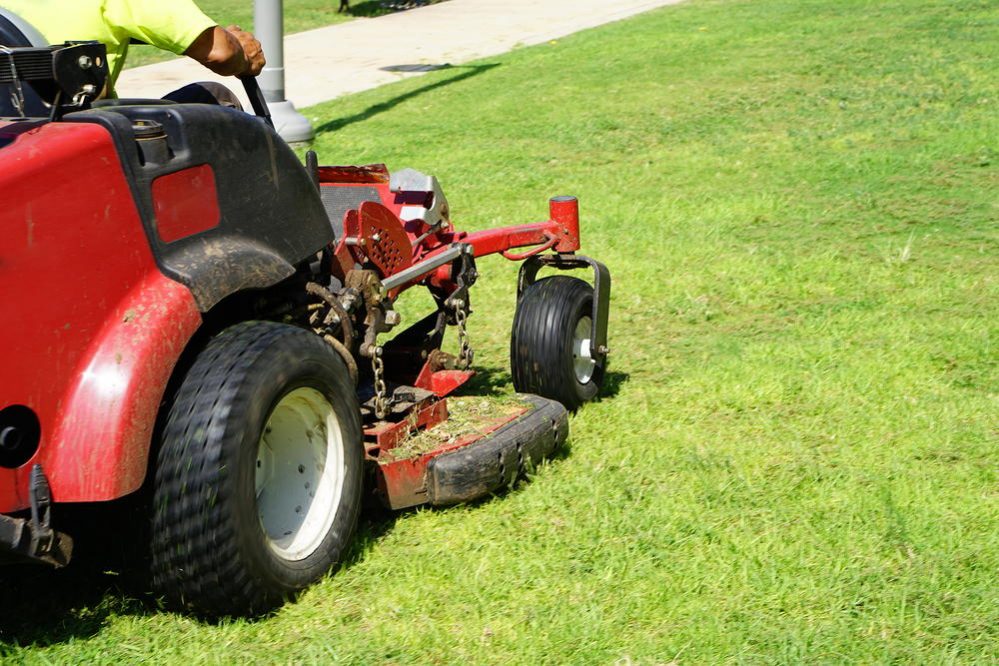 Many years ago, I was strolling into one of our buildings and noticed that the grass was kind of shabby. It was not very healthy, hadn’t been cut in a while, and the last time it was cut was done poorly. I am not one for requiring exquisite furnishings, decor, or landscaping, but I believe most visible tasks should demonstrate a minimum level of quality.

At a management meeting, I brought this up and found out that the landlord was responsible. Since the quality of the grass cutting was unlikely to increase his revenue, he didn’t care. Fortunately, our lease was up for renewal, and he proposed an increase. Our team told me that they could use this and a few other negotiation points to reduce the rent increase. So, we agreed to assume the responsibility for the upkeep of the grounds around our buildings.

Naturally, the discussion turned to how we would accomplish it. Should we add a new employee, contract the project out, or a combination thereof? I generally prefer to contract out virtually everything that is not core to value delivery. But as the CEO, I didn’t intend to micromanage the decision.

The team dutifully pursued both options. In fact, to effectively compare, they decided to obtain quotes from contractors and advertise for an employee who might take over the project. Then a great thing happened … one of the job candidates had an outstanding interview. Tom was dynamic, energetic, and charismatic. He’d love to take over the groundskeeping chores and promised that we would be happy with his work. He would handle it all.

The fiscal analysis showed it might be a tad more expensive to bring the work in house, but given that the landlord had contracted out with two of our finalists for the groundskeeping contract, it seemed likely that we might not be happy with the outcome, possibly have to change contractors, and would suffer from unbudgeted administrative overhead.

So, my management team gladly made Tom an offer. Given my penchant for outsourcing, my head of Administration arranged for the new caretaker to stop by my office for a quick meet and greet during the interview process. I found him charming and sincere. Tom did not disappoint. He worked hard, his quality of work was exceptional, and on top of it all, he was very visible. Although he always looked busy, he would take time to meet people, learn their names, greet them, and encourage them. In fact, he seemed to lead by example. He was very happy in his job, and it seemed to some of us that he was working uncompensated overtime, for which he was cautioned. He was popular and clearly added energy to the organization.

We definitely had attractive grounds. Within a year, he was nominated and received one of our monthly team awards for contributions.

We also did a top to bottom stack-up of performance across the company, which used to help with the bonus pool. We liked to make sure that a lower-ranking, perhaps hourly, employee was in the top spot. He qualified and won that spot, approved by all the VPs, during his second year.

Everything was great with Tom. So naturally, when he was six months into the job and asked for a new lawn-mower, it was granted. In fact, it sailed through the capital incremental acquisition process … everyone wanted to encourage him. A few months later, he asked to attend some courses on groundskeeping. Easily approved by his supervisor.

He came back from his training energized and developed a plan for cutting the grass in alternating patterns, a fertilizer and weed control product application schedule, and a new watering schedule. He pulled in consultants to change out some of the plants that weren’t ideal for our locale and even brought in a landscape architect to specify attractive and ecological planting patterns around the building. None of these expenses were much. In fact, given the positive energy he was contributing to the workforce, we all felt great about supporting Tom and his work. He loved what he was doing and, likewise, we loved supporting him. I would say we even took pride in ourselves for nurturing him.

Shortly after he won the ‘top slot’ award, he arranged to have some mid-level employees teach him how to put together a PowerPoint presentation. He rehearsed it and scheduled a briefing for the executive team. We thought it was cute. Tom showed up in a suit and gave a 30-minute presentation on how he could take our grounds to the next level. He could perform a crop rotation schedule where some of the plants would be replaced, and simultaneously, the irrigation systems would be upgraded during the rotations. We would use less water but have more lush plants, be ecologically aware, and have the best grounds in the region.

Tom’s presentation was excellent. We all smiled to ourselves as our protogé was maturing. He would need some additional expense budget and capital, but it really wasn’t that much. So, we endorsed his proposal on the spot, shook his hand, and rewarded his initiative and drive. It was a great example for all.

When one of our executives left, we re-organized, and Tom reported to a new director and a new VP. It didn’t take long for these managers to appreciate Tom as well as see how highly regarded he was within the organization. So when Tom approached them about adding staff, he received a favorable review.

Tom pointed out that his overtime bill was increasing, and he couldn’t possibly keep up with all the work. It wasn’t just the groundskeeping but also the plant rotations, new irrigation systems, and the maintenance of all the capital equipment. Plus, he wanted to take some time off because his wife was expecting. He had no backup, and the groundskeeping would fall into a poor state if the schedule was not maintained.

Naturally, the new managers wanted to ‘join the parade’ in support. So, they promoted Tom to be the manager of landscaping services and allocated two slots with the proviso that he and his employees cross-trained in both the maintenance of the equipment and in the landscaping duties, which was viewed as a clever anti-bureaucracy pre-caution. Tom did an excellent job of hiring two good people to support his department. Tom signed up for both company management training and support courses outside the company, including ones on computers and computer applications like Microsoft Office.

Within several years of Tom’s employment start, he had grown his landscaping department to four people, a fleet of equipment, advanced methods, and was regarded as one of the best in his field. However, he now spent the majority of his time at a desk scheduling his team and their activities, managing budgets, and preparing presentations to defend his department, a task for which he was exceptionally qualified. In fact, during one belt-tightening exercise, he was so compelling that he actually ended up with an additional headcount.

Unfortunately, one reason we valued Tom was that he had always been out and about doing the landscaping and had become a fixture and focal point of positive energy. As employees walked by, he engaged them and had a kind word for almost everyone. Now, he had an office and was stuck behind a desk grinding away on his budgets and charts. He gave engaging presentations, but that was the only time we saw him.

Tom was invited to give presentations in the region as we had by far the most impressive landscaping program for a company our size. As one would expect, it wasn’t long before Tom was offered a terrific job by a much larger firm to manage their grounds and building maintenance programs across a multi-state area with a nice bump in salary and benefits. Given his young family, he accepted, and we all congratulated him, taking pride in the individual contributions we had each made to our protogé.

Naturally, he was replaced by one his direct reports, after an appropriate HR process. That person was almost as good as Tom and wanted to make his mark, so he proposed new programs to his managers. Eager to foster their new manager, they approved several of his programs, which included bringing in some contractors to off-load the landscaping work to allow his team more time to plan their next set of improvements.

Interestingly, one area of ‘improvement’ was the installation of little chain fences around the patches of grass and signs that said: “Keep off the grass!” They determined that a portion of their budget was spent repairing turf where employees cut corners and created ‘deer trails’ between buildings and to

Around this same time, we had a fuel spill in one of our operations, and a failed internal audit showed that we were not following the procedures for fuel handling as recommended by the Environmental Protection Agency, both of which were bad for compliance and safety. We also conducted an internal audit regarding our compliance to federally mandated OSHA rules, which are designed to protect employees and contractors from unsafe practices, and failed that as well. So, we had to make more upgrades to our physical plant, develop a notebook of processes and procedures to protect our assets, our employees, and the environment. The new team did an excellent job responding to each of the issues, but they contracted out more and more of the landscaping so that they could spend more time ensuring we were totally compliant with all federal, state, and local rules and regulations and that the department was compliant with our ISO 9000 processes.

A valuable lesson is to spend considerable time deciding what the core responsibilities of the enterprise for value delivery are and avoid taking on ancillary tasks. No matter what the original intentions, every department tends to grow and spawn bureaucracy. Unfortunately, talented employees in non-core functions are likely to accelerate the growth in bureaucracy.

Note: This is not a true story but is a parable based on a collection of many similar examples. In this fashion, I can protect many good employees and colleagues with the best of intentions but who might otherwise self-identify with this case study.